Tahini is mentioned as an ingredient of Hummus Kasa, a recipe transcribed in an anonymous 13th century Arabic cookbook, KitabWasf al-Atima al-Mutada.

Percentages are relative to US recommendations for adults. 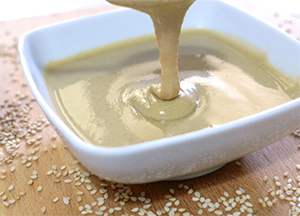 Tahini paste is used in a variety of dishes. Tahini-based sauces are common in Middle Eastern restaurants as a side dish or as a garnish, usually including lemon juice, salt and garlic, and thinned with water. Tahini sauce is also a popular condiment for meat and vegetables in Middle Eastern cuisine. In addition, it is a main ingredient in soups. As a spread, Tahini can replace peanut butter on bread, though the flavor and texture are quite different.